It’s 2014. I have a newborn baby girl, Livia, and I don’t feel like myself at all. Our friends obviously want to come over and meet her right away. I don’t want to see any of them; I just want to be left alone. My parents, my parents-in-law, and some of my best friends come by. Because of the stitches down under, I can barely sit, stand, or walk. This leaves me with few options. I feel exhausted; a walking zombie. I can barely talk. I just want to sleep. I pretend I’m feeling fine and that I have my act together. But I don’t. Inside I’m terrified. I ask myself on a daily basis, How do other mothers do this, this thing called motherhood?

I just don’t feel like seeing anyone. In the evenings, I cry for hours. I cannot deal with anything or anyone. No music, no television, and woe betide anyone who so much as dares watch the news while I’m in the same room.

It was obvious that I was really struggling. At the end of the first week, I think I’d shed more tears than I’d ever shed before. I was completely drained. I clung to a nurse and asked, ‘Is this normal? I think I’m having postpartum depression.’ She looked at me and replied that I was just very disrupted by the hormones and lack of sleep. I should sleep with earplugs that night and take a sleeping pill and my husband would do the night feeds. ‘Then you’ll feel a lot better tomorrow.’ She was right; I did feel a little better the next morning. But not the days after. Nor the weeks and months after that, either.

I slipped further and further into depression. I had many depressive thoughts, fluctuating between I should never have become a mother to I want to die. I worried about everything: whether I was a good mother and if I was the only woman on Earth who wasn’t capable of being a good mother. When my daughter slept at night, I lay awake, worrying. When someone unexpectedly swung by to say hi and admire Liv, I freaked out. And when I left Liv at home, even if just to buy some groceries, I checked my phone every two minutes to make sure there hadn’t been a disaster. I stopped meeting up with friends. My self-deprecation and sense of humour disappeared. Where had I gone?

I became more and more silent, my thoughts progressively darker. When I walked over a bridge with my baby in the pram, I thought, If I let go of her now, the pram will speed down the bridge and she’ll be dead. And when I walked past the stairs of our apartment complex, I thought, If I overturn the pram, she’ll be dead. I felt so ashamed of those thoughts, but I couldn’t block them out. I thought I’d never be able to forgive myself for thinking such terrible things.

One night I realized that I had to voice some of this to my husband. As lightly as possible, I said, ‘Sometimes I think our daughter deserves a better mother than me.’ He looked at me, stunned, eyes widening, and said, ‘Well, honey, you can’t say that to me! I’m really shocked when you say stuff like this. Of course you’re a great mother.’ I was so startled by his shocked face that I thought, Okay, I don’t want him to worry about me. He’ll start to think I’m crazy. I’ll keep it to myself. It’ll be fine.

Two weeks after Livia’s birth, I decided to call my former psychologist, the one who worked with me during the grieving process when my beloved grandmother died. She had helped me a great deal and I felt a very strong connection with her. At the start of my therapy sessions I didn’t have the courage to tell her immediately about the dark thoughts I was having about Liv. I felt so ashamed. Fortunately, she asked me a lot of thorough questions and after five sessions, I finally plucked up the courage to tell her what was really going on in my head. She replied, ‘Tilda, like many other mothers, you’re suffering from intrusions. These are compulsive thoughts that the vast majority of mankind also have. Most people let go of the thoughts just as easily as they come up. You, however, are viewing them with a magnifying glass. As a result, they get bigger and worse in your head.’ Then she, ‘You have postpartum depression.’

Aha! This was a huge eye-opener for me. Intrusions. I wanted to know more, but my husband had banned me from googling anything at that time, because I became obsessed about whatever I read on the internet. My therapist also recommended avoiding the internet, because I was driving myself crazy googling everything. So she printed an article about intrusions from Psychologies Magazine and I read it repeatedly until the edges of the paper were frayed and curled. It helped me stop being so afraid of the intrusions.
There are some misconceptions about PPD: People have images of a mother not loving her baby or neglecting her child. I didn’t hide my child in a cardboard box, nor did I pretend she didn’t exist. Instead, I was overly anxious and panicky that something bad would happen to her, which made me unable to see the joy in living. I had intrusive thoughts about my baby, myself, and Tim. I was worried out of my mind that, thanks to me, something awful would happen to Liv. I didn’t eat, I didn’t sleep, and I didn’t talk about any of my negative thoughts or feelings because I felt so guilty and ashamed of them. The control freak in me worked overtime, and on the inside I slowly became a staggeringly uncertain version of myself.

After eight months I noticed that my depression was beginning to ease. I remembered the nurse’s comment, and I started thinking about what I really wanted to do with my life. In retrospect, the depression turned out to be a way of resetting my brain. Gradually I noticed that there was room in my head to think about the future. I wanted nothing more than to help other mothers, so I trained as a life coach and started my practice for other mothers who feel like they can’t breathe, who feel suffocated by everything that’s going on in their lives, who need help and guidance through a difficult time. 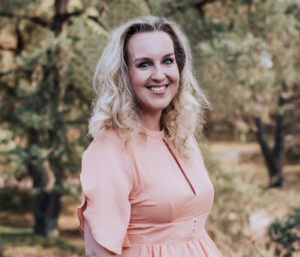 Tilda Timmers, Postpartum specialist and author of ‘This is Postpartum’

As an author and coach, I aim to help women feel safe and secure because when you first become a mother, you’re likely to put a great deal of pressure on yourself to be a very ‘good’ mother. You feel like you want to be the best version of motherhood there could possibly be. But let’s normalize not feeling on cloud nine after childbirth. New parenthood is not always easy, so we need to be open about all the stuff nobody talks about. It’s completely fine to find parenthood hellish at times. It doesn’t mean you’re a bad parent, and it doesn’t mean you don’t adore your child.

Some mothers reading this will be struggling with occasional anxiety, whereas other mums will have (or suspect) a postpartum depression diagnosis. Whether it is the former or the latter or anything in between, this message is for you, dear mother. It doesn’t matter how you label your experience (I prefer no labels at all, honestly); what matters is healing yourself, being kind to yourself, and knowing that you will get through this. Step by step, one day at a time.

This. Is. Postpartum. Nothing more, nothing less. You’re not alone.

This site uses Akismet to reduce spam. Learn how your comment data is processed.